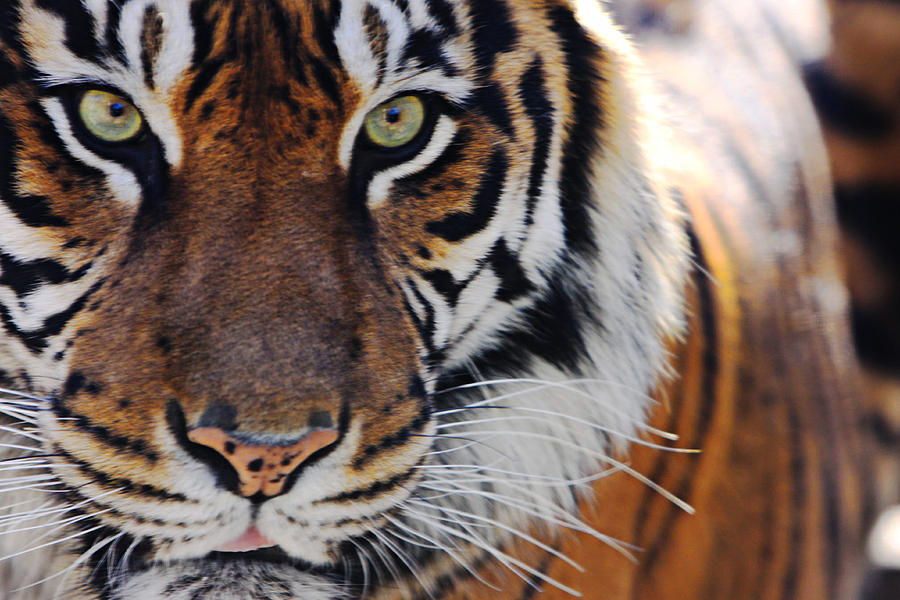 This is the first in a three part series of close portrait work. I hope you enjoy the beauty of this magnificent animal as much as I do.
Tigers are among the most recognizable and popular of the world's charismatic animals. They have featured prominently in ancient mythology, folklore, and continue to be depicted in modern films and literature.
Sadly the tiger is an endangered species. Poaching for fur and body parts and destruction of habitat have simultaneously greatly reduced tiger populations in the wild. At the start of the 20th century, it is estimated there were over 100,000 tigers in the wild but the population has dwindled outside of captivity to between 1,500 and 3,500. In zoos, tigers have lived for 20 to 26 years, which also seems to be their longevity in the wild.
Featured in..Beauty
Featured in..Landscape flowers animals
Featured in..nature Photography
Featured in..Digital Veil
Featured in..Animal Photography
Featured in..Sensational Animals
Featured in ..Images That Excite You
Featured in..Featured Art and Photography

So stunning...congratulations on your sale!

An amazing and gorgeous portrait.

Stunning photo of this magnificent creature!

Wow, such an epic capture lf

Thank you very much

Thanks Hanne very much, I think she's a beauty too.

Congrats on the sale Kandy.

Congrats on your sale!

Congratulations on the sale!

Thanks so much to the collector from Crosby Texas. Your support of the arts is truly appreciated.

Oh the power of those eyes!

Yep thats what caught my attention!

The most beautiful animal in the world! Stunning close portrait work!

Awesome capture Kandy! Congratulations on your feature in "Images That Excite You!"