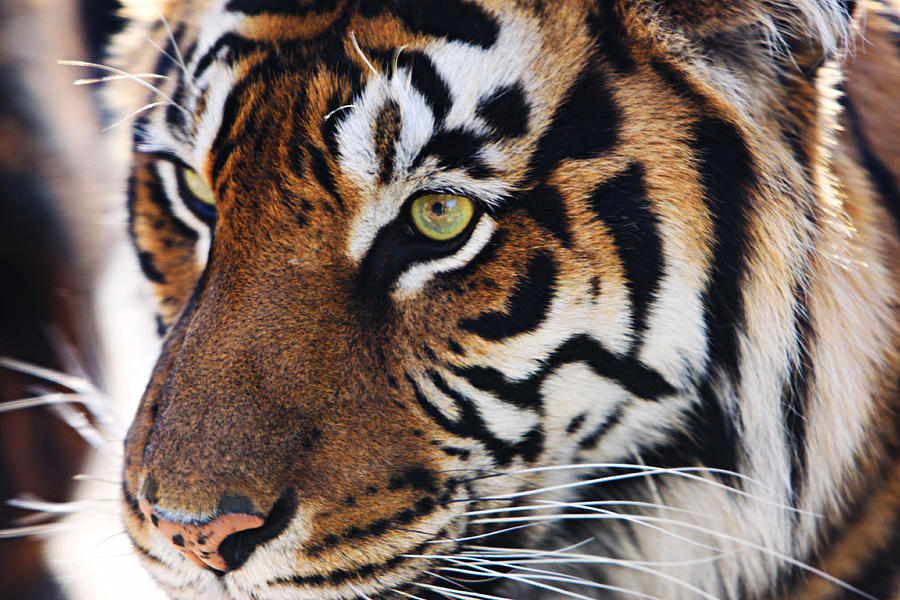 The third and final image of this three part series of close portrait work. I hope you enjoy the beauty of this magnificent animal as much as I do.
Tigers are among the most recognizable and popular of the world's charismatic animals. They have featured prominently in ancient mythology, folklore, and continue to be depicted in modern films and literature.
Sadly the tiger is an endangered species. Poaching for fur and body parts and destruction of habitat have simultaneously greatly reduced tiger populations in the wild. At the start of the 20th century, it is estimated there were over 100,000 tigers in the wild but the population has dwindled outside of captivity to between 1,500 and 3,500. In zoos, tigers have lived for 20 to 26 years, which also seems to be their longevity in the wild.
Featured in..Nature Photography
Featured in..Cards For All Occasions!
Featured in..Sensational Animals

This is simply beautiful! L/F

Wow! Fantastic photo and so emotional!

Kandy. Wow I love this work and that face i feel tells it all in one look ,Wonderful take. L/f

Thank you Joyce for your kind words ~ big cats carry power and beauty, they're a pleasure to photograph.

Excellent crop and composition to give this image enough detail for identification, but still have an air of abstraction Kandy.

Beautiful close-up of this tigress!!