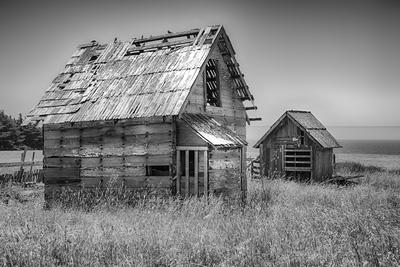 Abandoned farmsteads have a beauty all their own. As these old places fade from view I do my best to capture their artistic appeal and preserve a bit of history. On the bluffs above the Pacific Ocean in Mendocino County California sits the abandoned farm site called the Old Kent Ranch.

In the mid 1800’s the small coastal town was then called Beall’s Harbor named for three brothers who were amongst the first to settle the area. In 1857 they sold the property to William Henry Kent who moved to California from Maine to try his luck at gold mining and eventually farming. William and his wife Charlotte are credited with planting the first Eucalyptus trees on the coast the stand continues to this day running along the side of Highway1 just to the north of Little River. The Kents along with their two sons and their families had a prosperous dairy farm.

The property stayed in the hands of the Kent family until 1941 when they sold their Little River Ranch to Hollywood movies starts Alan Curtis & IIona Massey they used the home as a retreat. Within three years it was sold to Virgil & Elvira Chiado not long after it was again sold to Sidney & Clora Spring a local Mendocino farming couple. The Spring family ran a self-sufficient homestead for three decades. In 1996 a large portion of the ranch west of Highway 1 was sold to Bob Raymond who eventually sold it to California State Parks. In later years Sid and his former wife Clora sold the rest of the ocean side of the ranch to the California Coastal Conservancy.

Today the property east of Highway1 is being repaired and restored, the Spring family continue to farm 40 acres of this land.


Most of this historical information was compiled from an article “The Old Kent Ranch Little River Farming Tradition, Past and Present” written by Margi Gomez titled

The Age of Light

Grimalkin Studio recently came upon a great series that gives us a glimpse of where we came from, Waldemar Januszczak's landmark BBC4 series "The Dark Ages - An Age of Light". Its a four part series that traces the artistic contributions of the Dark Ages.

Part I, The Clash of the Gods, traces the emergence of Christianity as an artistic force incorporating and replacing the Classical, pagan influence.

Part II, What the Barbarians Did for Us, presents the barbarian Vandals, Goths and Huns as something more than warriors, invaders and destroyers by focusing on their artistic and architectural achievements.

Part III, The Wonder of Islam introduces the distinctive forms of Islamic architecture and art designed to depict the wonders of Paradise along with a discussion of the incorporation of their artistic impulse into their astronomical study.

Part IV, The Men of the North presents the Vikings as creators of stunning artwork as well as the fearsome raiders of Britain and Ireland.

This series is engaging on many levels and Waldemar Januszczak is an entertaining and knowledgeable host with a style that is quirky in the best sense.